Our last full day in Nicaragua was Sunday, July 2nd.  We were up at some ungodly hour to take Courtney to the airport, then Sara and I returned to the hostel where we discussed future travel plans and got some advice on traveling in Mexico from John.  (The more I hear about Mexico in my travels, the more intrigued I am…)

After a four hour catnap, we went in search of breakfast and ended up back at the mall, in a coffee shop with connections to the coffee plantation we’d visited on Volcan Mombacho.  I really enjoyed the music that was playing there, so I asked our waitress whether there was an album I could buy or if she could tell me the name of the artist so I could go get my hands on the music myself.  She said the music was streaming off the internet, so she didn’t have any answers for me, but she was more than happy to write down some music recommendations for me. 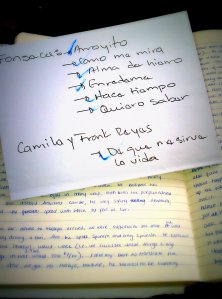 The music was awesome.  I’m currently obsessed with Fonseca, whose song “Arroyito” I shared in an earlier post.  I’ll share “Enredame” now because it’s also excellent:

I wasn’t sure how I felt about Camila y Frank Reyes’ song “De que me sirva la vida” until I listened to it a few times, because I usually have to be in a certain mood for a power ballad.  So, listen to it a few times and it will suck you in.

The thing I love about foreign music is that you really don’t have to know the language in order to enjoy it.  I tend to sing (terribly) along to Hindi, Spanish, Italian, and Portuguese songs and know very little of most languages.  Of course, if you turn the sound off, it’s obvious I’m only making the sounds, but I choose not to see that as an issue.

Back at the hostel after breakfast, Sara and I met Roberto, a 19-year-old employee at the hostel.  He had a larger-than-life personality, describing himself as having once been good looking “before the gringo food.”  We learned that gringo/a is a term used mostly just to describe Americans.  I had previously assumed it meant anyone from Europe or North America.  He had some strong feelings on the dancing skills of the American females, explaining that he’d been dancing with an American girl once and “was confused.  I didn’t know what she was doing.”  This was pretty funny, as I imagined the girl as doing some kind of crazy booty dropping or hippie dancing.  He also said, “I think the blonde hair, blue eyes people, they don’t like us.”  He was speaking in terms of romantic relationships, but I thought it was an interesting statement nontheless.  As a tourist or a traveler, you visit a place, you make friends, and you have an awesome time that you then go home and tell friends and family about.  It’s hard to keep in touch with people you meet and then leave behind.  If they’re other travelers, then they understand that this is how it goes.  Sometimes you’ll meet again, but more likely you won’t.  It’s all up to serendipity, really.  But, if you bond with someone who isn’t a traveler, a native in a place you’re visiting, what effect do you have on them when you leave?  Travelers are very good at flitting in and out of places without setting down roots.  I understand this:  roots are scary.  Personally, I’m more afraid of stagnating than I am of chaos.  The thing is though, it’s very easy to get caught up in you and in your adventures.  For you, every interaction you have, every challenge you struggle through is part of the bigger picture of your life.

I’m pre-coffee at this point (and a little jittery), so bear with me if that became nonsensical.