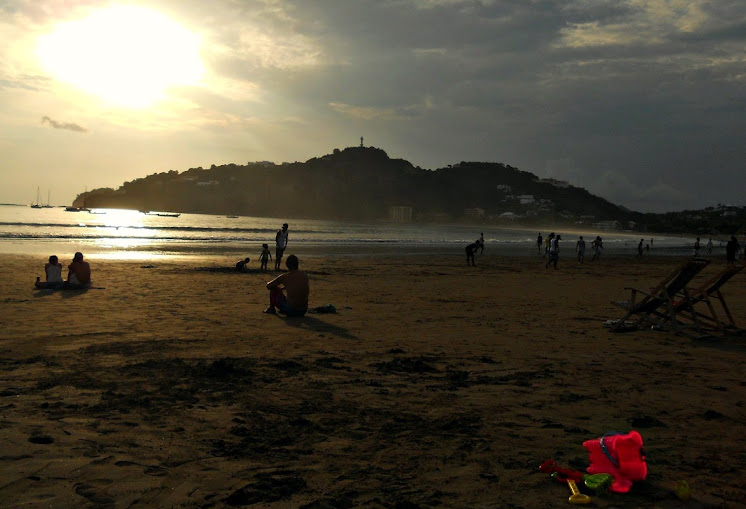 one of my favorite beach pictures from San Juan del Sur

Towards the end of our mini-adventure at the Iguana (yes, we’re still at the Iguana), Sara flicked a lime from my drink across the bar, hitting the guy sitting next to us.  She apologized and apparently that was all he needed to strike up a conversation.  I believe his name was Morgan and I’m fairly certain I only remember this because we made him say it at least three times (“What? Your name is what?” loud noises “SORRY, I MISSED THAT!”).

Morgan was formerly a web developer in Belgium, before finally deciding enough was enough and that he needed to get out before it was too late (i.e. settling down and not being able to up and leave). So, he sold everything, told his family “adios,” and flew to San Francisco where he and a friend bought a car and began a drive down through Central America.

Obviously, upon hearing this, I began peppering him with questions:  what did your family say? what did you say to them? what made you want to do this? how long are you traveling? how long have you been here? where are you going next? were you nervous?

He said he’d been more apprehensive about going through Mexico which, given recent events in that country, is logical.  They’d only planned to spend a week or two there, but ended up spending two months camping on beaches and traipsing through the country.  I asked if the country was as tumultuous as the media made it sound, given that the media tends to blow things out of proportion.  Apparently the issues are mostly in the cities closer to the border and not country-wide.  They experienced none of the unrest in their journey through the country.  This was incredibly intriguing to me.

Following Mexico, they continued through Central America, stopping in places that interested them and spending extra time where they felt compelled to do so.  They had arrived in San Juan that morning and were planning on spending two weeks there.  After Nicaragua, they were intending to drive through Costa Rica to Panama, where they planned to sell the car and start using other modes of transportation to explore South America.  He wanted to end up in Brazil for Carnaval and figured he would probably head home next February, depending on whether or not he ran out of money before then.

Had I not needed to be back in Boston for the Thompson Island trip a week after Nicaragua, I would have seriously contemplated asking to go with him.  Instead, I came home and made a small purchase:

Conversations like that make me realize how easy it would be to pick up and go, funding the experience through the sale of material possessions.  God knows I own too much crap anyway (books are not included in that).  It would be so simple.  I’m the only thing holding me back, funny as that sounds.  It’s a scary thought and something I’ve been mulling over for a while now.  I could get a job that paid well, even if I hated it, and if I could commit to that for a year, I could then quit and be free to leave, to have adventures.  An intoxicating idea.  Ultimate freedom.

So, we’ll see what happens.