On the plane from Managua to Texas, I was unhappy.  I was not ready to leave the country and was even further annoyed by our traveling companions on the flight.  Being the mature twenty-something that I am, I plugged in my headphones and scrawled a two page rant in my journal: 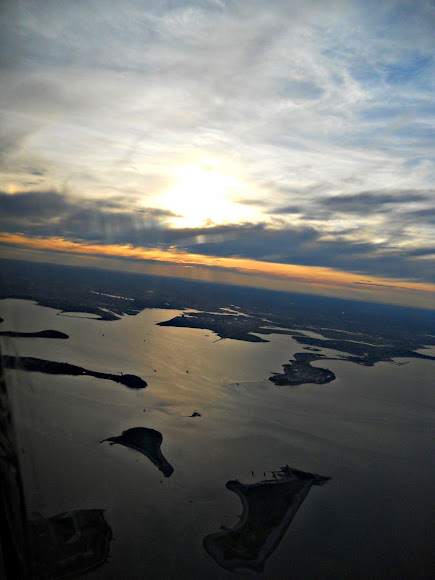 taking off from Boston at the beginning of the trip. We’ve come full circle.

Ugh, I can’t believe we’re leaving already.  I could definitely stay for at least another month – we’ve seen such a tiny piece of the coutnry and I’d love to see the Caribbean coast.  Part of me thinks that if I didn’t have obligations for work next week, I’d absolutely arrange for a longer stay.  Sara and I are already trying to plan our next trip.

There was a security check before we boarded the plane.  The person who searched my bag was perplexed at first by the overall style of my backpack, so I had to help him get it unclasped enough to open it – and even then it was so tightly packed that he could barely get a hand in.  Re-closing it was another struggle.  I handed him my purse and told him I’d take care of the backpack.  He opened and dug through my purse, pulling out my copy of Pride and Prejudice and Zombies.  He flipped through it, looked at the cover, looked at me, and looked back at the book as if I was weird for having such a thing in my possession.  I felt judged but, it’s all good, I read what I want.

Let’s be real here for a second. How could you not want to read this?

Something I noticed about Nicaragua is that it seems to get a lot of missionary groups.  Sara and I aren’t together on this flight and I am surrounded by one such group with t-shirts that say “Involving People to Inspire Nations for Christ.”  Consistering the missionary spirit is part (there were many factors) of what turned me off to Catholicism, Christianity, and organized religions in general, you can probably imagine how I felt about this turn of events.  I realize Nicaragua is a Christian country, so it’s not as though they’re telling the people that their native religion and traditions are worthless and wrong (that damage was done when the first conquistadors arrived centuries ago.  Admittedly, it was not all bad, as the natives stopped sacrificing their daughters to volcanoes, but still.).

The issue I have with such missionary groups is that it appears they go into the situation with (conscious or subconscious) feelings  of superiority, maybe even a degree of white supremecy and definitely a ton of privilege.   This is theoretically made more harmful by the fact that they believe they’re being humble and helpful to the natives because, in the U.S., we do things the right way.   I am not at all saying that I’ve never been guilty of this.  In fact, I’m fairly certain I had a similar self-concept on the alternative spring break trips I participated on in college and even perhaps when I first arrived in India – that self-confident, self-assured idea that I could change the world and make things better for peopel in these places where the society was not like our own.  How naive it was to believe that a week’s trip to a place can make any kind of lasting difference!  One cannot possibly make any change until he or she has learned the culture and understands what motivates people in the area and how society functions.  Learning takes years and committment and dedication to your chosen task.  As I’ve said before, it is so easy to flit in and out of a country.  You “live like the natives” for a week or a month or a year, but then it’s back to what you’re used to.  One week provides barely a peek at a culture that has been a millenia in the making.  When I left India after a year of working and living with the people in the area, I barely felt like I had a handle on the culture.  I was more comfortable, to be sure, but I was still just learning.

It is wildly selfish and conceited and irresponsible of us to walk into a situation with which we are unfamiliar and uneducated (because no matter how many books one reads on the subject, experience is infinitely more important (if you, like me, are a Harry Potter fan, then you might be thinking of Hermione’s disagreement with Umbridge’s claim that reading about defensive spells will be more than enough to get them through their practical exams.  Geek moment over.).

Without being intimately familiar with a culture and a people, attempting to stir up any kind of change in a limited period of time is nearly impossible.  Factor in your imminent departure and all your good intentions are even less likely to succeed.  Think about how you might feel if someone from South America, Asia, or Africa walked into your neighborhood, started making changes, and then left.  Attempting to impart change without being aware of one’s own biases and using strategies based in one’s home culture is ineffective, unsustainable, and inconsiderate.  It is so much more important to first learn the culture and then to give the people themselves the tools and skills to be their own agents of change.  Don’t go in as a savior, go in and empower.

I don’t know how to stress all that enough.  Nor was I anticipating going on such a tangent.  Essentially, the traveler, the potential do-gooder, must accept that they travel for themselves alone – to experience new cultures and to allow themselves to grow, to be changed by the people and cultures they experience – rather than to change what they see.  Accept that you are but a temporary, fleeting moment in the daily routine of the people you meet.  They may even remember you years from now, but if you’re in a touristy area, they’ve probably seen many like you.  The best thing the traveler can do is to meet each person as a fellow human, regardless of language or station, learn their story if possible, and remember that they, themselves, represent an entire country.

Appropriately, Gotye’s “Somebody I Used to Know” is playing right now.

I hate that we’re taking off right now.  I also hate having an aisle seat.  I can’t help wondering when I’ll be back (I refuse to think “if”) and how this beautiful country will have changed in the interim.  I hate leaving new places and I dislike returning to regular routines.

Also, the flight attendant just suggested over the intercom that people shut their shades if not enjoying the view so that others can better see the TV monitors.  Gross.  That isn’t what this is about!

Final thought:  I should not wear white because I will inevitably draw on myself.