“I feel like Bob the Builder.”  This was Sara’s take on our very stylish hard hats as we traipsed around the crater taking pictures.  It was a more accurate description that I really want to admit. 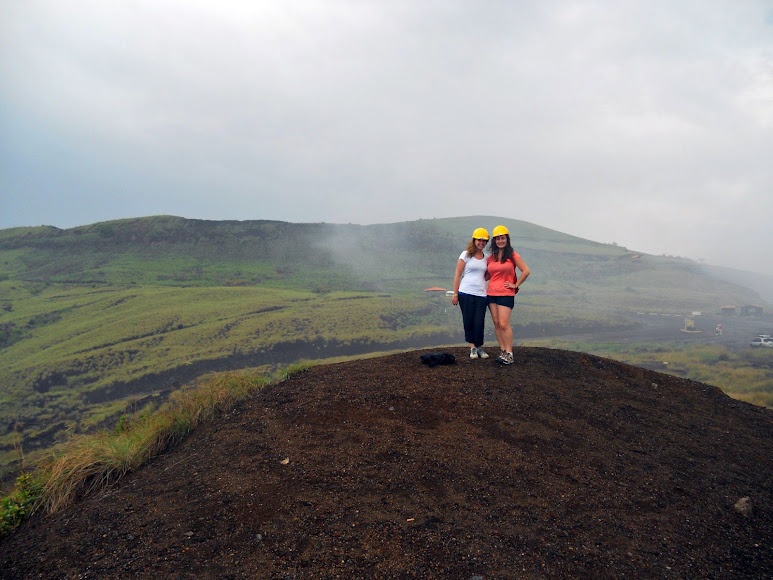 At a distance, the resemblance is indisputable.

Back in the car, we continued up the volcano, stopping at a gate to pick up our English-speaking guide named Joel (pronounced Joy-el) who relieved me of the surprisingly exhausting responsibility of translating  (this is not meant to imply that I wasn’t IMMENSELY PROUD of myself). 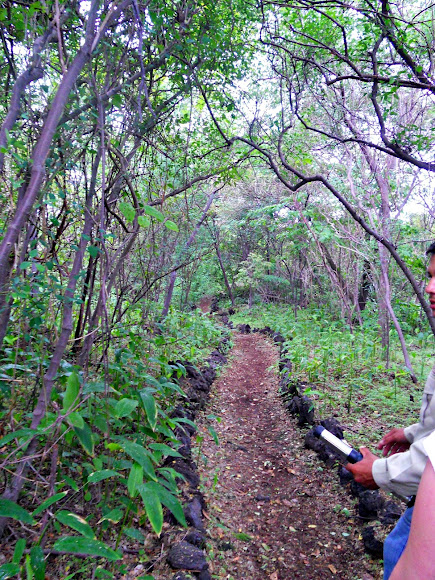 lava rock path & half of Joel

Joel was going to be our guide through the caves, so we drove a little further up the volcano and stopped at one of the shelters (in the event of an expulsion, hide under this if you don’t have a car).  The shelters strongly resembled bus stops so I’m not sure how effective they would be in the event of a true emergency…  Joel led us (including Roberto – I loved that he came with us!) along a lava rock path to a point where he stopped and showed us a cave.  He explained that 100 meters in, this cave reached the crater, close to the center of the volcano.  I was under the rather worrying impression that this was the cave we’d be venturing into, at least until Joel closed his explanation by saying, “…but we’re not going in there.”  Not that it wouldn’t have been seriously cool, but I left my gas mask at home and wasn’t feeling breathing all the toxic gas. 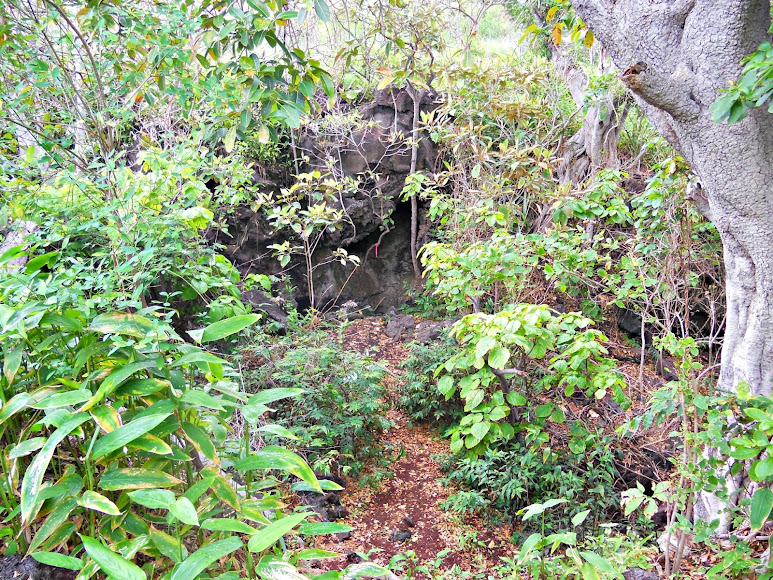 “This is not the cave you’re looking for…”

We followed Joel a little further to an irregular set of stairs set into an embankment.  As we stepped carefully down the stairs (it was raining and they were slippery), Sara asked whether all this (meaning the caves) had been created by lava flows.  Joel answered, “the cave, yes.  The stairs, no.  We made the stairs.”  We ventured into the cave and I became acutely aware of how dinky and weak our flashlights were.  Their beams didn’t really have much of an impact in the all-encompassing darkness of the cave.   It’s a good thing I’m not afraid of the dark or claustrophobic because there might have been an issue.  Once our eyes adjusted to the darkness, however, the flashlights became a bit more effective.   I attempted to take some pictures within the cave, but, really, they kind of all end up looking the same because I was essentially just pointing and clicking.  Roberto was bringing up the rear and every so often he would say, “tsst, tsst!” and tap me on the arm to call my attention to a truly adorable little bat (or cluster of bats) blinking (do bats blink?) in the sudden light of his flashlight.  Invariably, they would fly away before I could get my camera in gear for a picture.  According to Joel, there were both fruit and vampire bats in the cave (plus another type that I can’t quite remember).  The vampire bats need to drink blood at least once a day or they will die, so they frequently snack on the poor little fruit bats.  I tried very  hard to get a picture of any bat, but failed miserably. 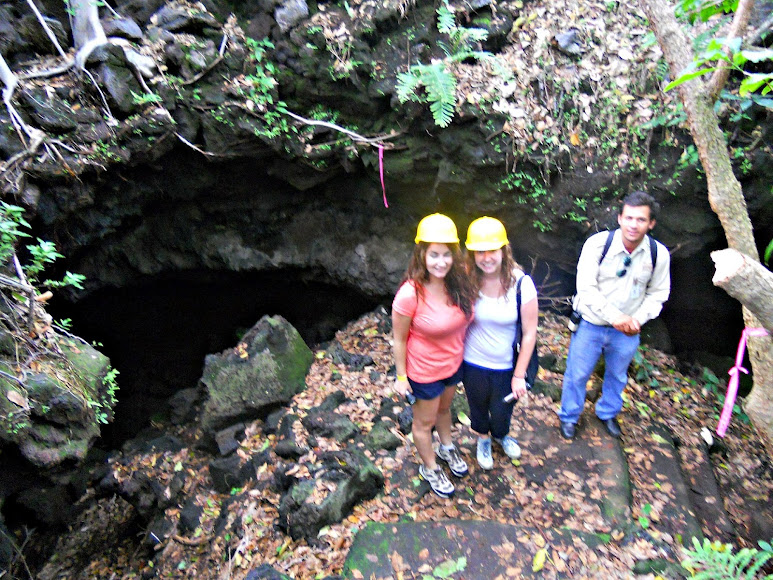 Absolutely one of the dweebier pictures of me, but that’s our guide (who I don’t think knew he was in the picture) on the right. 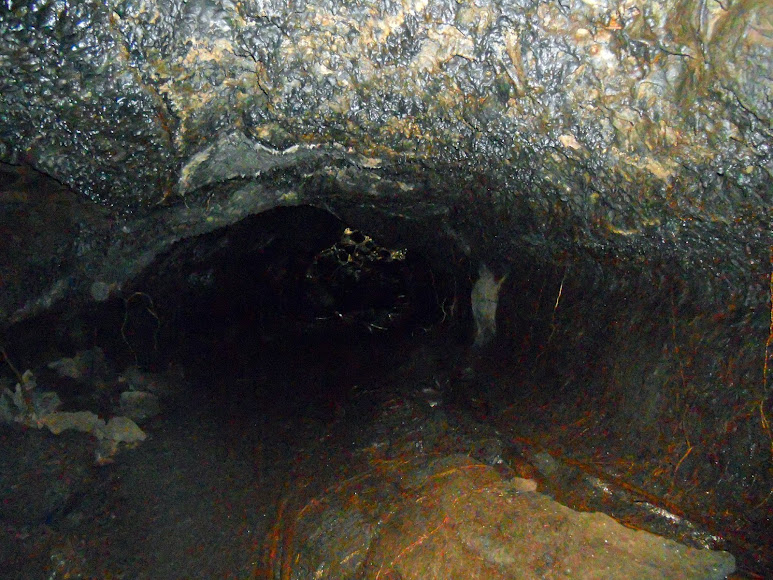 looking back at the entrance to the cave

At the end of the path, we found ourselves facing a wall of rocks.  Joel instructed us to turn our flashlights off, which we did after exchanging dubious looks.  He then pointed his flashlight at a rock at the top of the pile and told us to look at the spot after he turned off his flashlight.

He shut it off.

I have never experienced such a pressing darkness before.  It was the total absence of light.  To borrow the cliche, you could not even see your hand in front of your face (I tried).  Furthermore, aside from the distant dripping of water somewhere in the cave, there was no sound.  It was eerie.  Even more eerie was that when we looked at the spot where Joel had indicated, we saw a faintly glowing face.

After a few moments, we turned all our lights back on, took a picture, and began trekking back to the entrance of the cave.  Joel was very chivalrous, helping Sara and I step down when the terrain was rougher.  While I was aware that I was perfectly capable of getting myself safely through the cave (minus the couple times I hit my head on the ceiling), I appreciated the consideration.  You would absolutely have to sign a few waivers before going into this kind of cave in America.   On the way back, we asked Joel how he’d become a park ranger  He’d studied a relevant subject in university and then had been working at Volcan Masaya for three years since.  When we complimented his English, he said that it was harder to learn when he was a student because English lessons were much more expensive than they currently were. 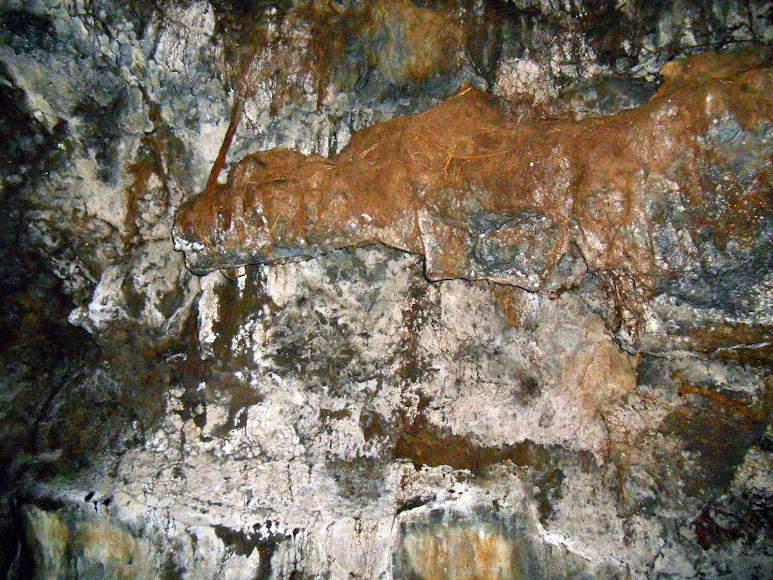 Outside the cave, Joel showed us a positively ENORMOUS wasps’ nest with HUGE wasps buzzing in and out of it.  RUN AWAY.

When we were all back into the little red car, Roberto turned it around to face the way we came and then… reversed?  I had heard Roberto and Joel talking about how little and economical the car was, albeit lacking in power, but what Roberto was doing still didn’t click in my head, even after Joel turned and said to us, “maybe this will work!”  Maybe what will work?  WHAT IS GOING ON??  It finally made sense when Roberto suddenly accelerated up the hill we’d come down previously.    Of course.  The car didn’t have the power or the 4-wheel drive to get up the hill normally, hence the running start.  It was a tiny bit nerve-wracking, whipping around hairpin turns at the edge of an active crater, but we survived, so it’s all good.

Next: What is Atole?